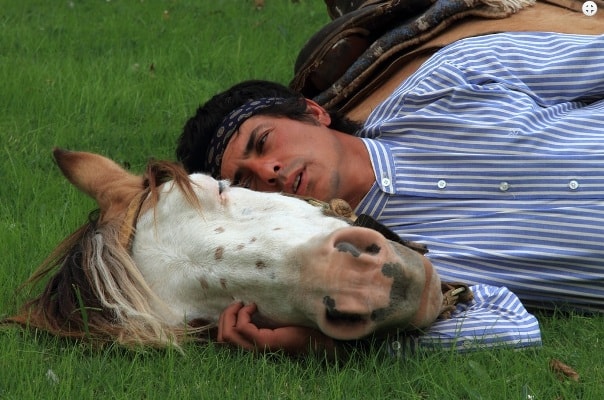 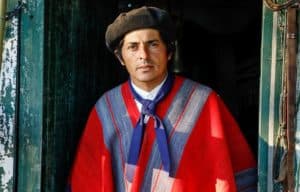 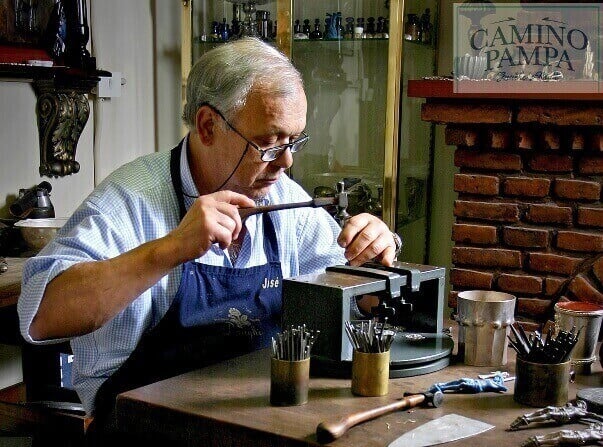 Juan Jose Draghi silversmith: Born in San Antonio de Areco, from a family of farmers in the province of Buenos Aires. Inspired by a strong vocational impulse, and generating a great technical command of the trade learned solely through experience, intuition, and a creative genius that earned him prestige as the re-discoverer of traditional Argentina silverwork.

His Draghi silversmith concerns and unique ability to handle the chisel led him to be in 1971, one of the 38 craftsmen present in the first week of Crafts Exposition in San Antonio de Areco. 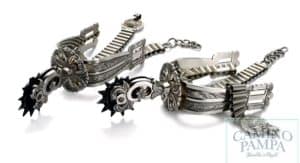 History of Silversmithing in Argentina:

Midway through the 20th century, silverwork in Argentina was losing its essence, as well as one of its most important qualities: its identity.

Industrialization stripped the works of their unique character, just as it did to so many other trades, substituting individual craft with the generic printing techniques of mass production. 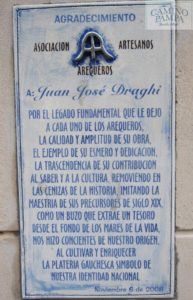 Ricardo Güiraldes from San Antonio de Areco took the journey of preserving the gaucho spirit of the epoch intact-embodied in his immortal Don Segundo Sombra acclaimed book: the most important novel about gauchos.

His work demands commitment to the preservation of the estate of noble traditions passed from generation to generation. 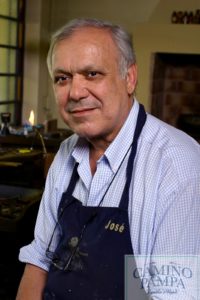 Therefore it’s not by chance that Juan José Draghi silversmith, devoted advocate of these values, always speak out loud: “I became a silversmith because I was born in Areco.” In San Antonio de Areco he found the source of inspiration to develop his work and start with tenacity upon a self-taught path.

He undertook a profound study on national fashions and customs, and inspired himself by trying to re-create the classic pieces on exhibition in the Ricardo Güiraldes Museum of the Gaucho, and wear by real gauchos in the Estancias. 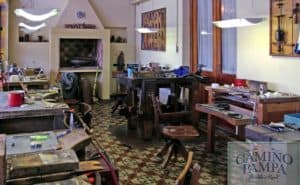 The handicrafts of Juan Jose Draghi silversmith are today spread out in a tour throughout the world. Many of them are very far away from Areco and Estancias, where they were conceived.

Juan José Draghi is faithful interpreter of the aesthetic personality characterized by the gaucho and its current expression, his contemporary equivalent.

Juan Jose Draghi silversmith was devoted to his principles, as well. Another loyalty that stand out.

This silversmith that is important in San Antonio de Areco and Argentina, has received many awards and satisfactions of a different order. But we imagine that none can be so overtaken experienced as when he was handed the gifts to be given to the Kings of Spain, Don Juan Carlos I and Queen Sofia. That “facón” sheathed silver and gold, and that “rastra”, must be the most admirable few garments created by Draghi silversmith 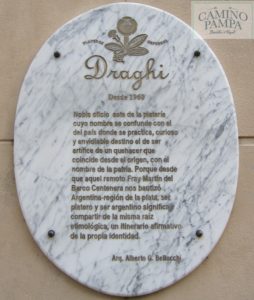 Presidents of USA: Reagan and Bush; the Prince of Saudi Arabia, Turki and Saud Faisal Al Saud; Chancellor Hellmut Kohl of Germany, among other world figures, have presents in silver with the Draghi´s punch.

The flag bearer of the Argentina Army 1st Battalion Logistics and their escorts, will take forever pieces of work of this great Argentina silversmith.

Currently his sons are still nurturing this art: Juan Patricio and Mariano, whose pieces have been selected to represent Argentina craftworks in the United States and France for World Cup 1994.

Partially extracted from the website of Draghi Plateros Orfebres, and Comodoro Juan José Güiraldes letter from May 9th, 1994. 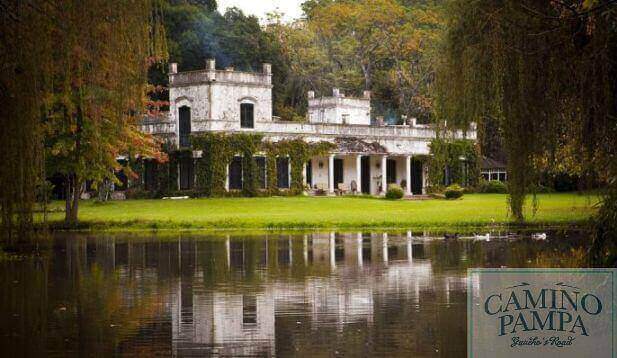 The trees at Estancia Los Patricios in San Antonio de Areco incluye a wide variety of acacias. The huge garden in front of the house with the pool to one side has a one-hundred years old maple casting a deep shadow big enough to shelter 500 people at 50 tables for an open air “asado”.

It is owned by Maria Luisa de Bary de Brane and Hector Juan Brané Istueta Landajo, descendants of Basque and French arrived in Argentina in the mid-nineteenth century. In addition to the family house where there are two big towers (one west and another east), a kind of stud with carriages and classic cars. 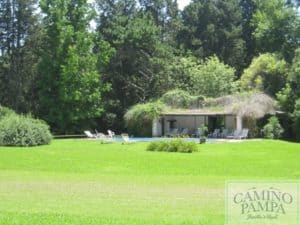 The estancia in San Antonio de Areco is known for its beautiful house, main style home “pampeano colonial” and all its infrastructure, storehouses and stables. Its large park has century-old trees of great magnitude and variety of species.

Héctor Juan Brané and Maria de Bary de Brané have been living in this pampa colonial style house for the past 36 years and have been taking in guests in a Estancia Tour for over 28 years.

Their children, following the family tradition, play polo. They had run a polo school and can even offer a wooden practice horse for beginners. 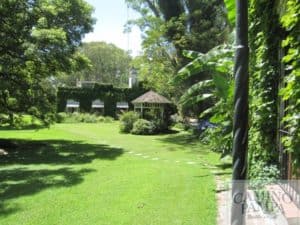 The park of the Estancia

Los Patricios is a 200 hectare estancia dedicated exclusively to farming.

In Estancia Los Patricios de Areco you will find an exclusive place where the old family house stand out from the rest.

The park has large centenaries trees and variety of species along the natural lake, providing an ideal spot in contact with typical nature of the pampa from province of Buenos Aires , Argentina 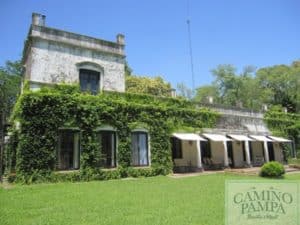 Full Day Tour to the Estancia Areco: In Los Patricios you can have an exclusive place with the necessary infrastructure and organization to serve large groups in a daytrip. The gastronomy includes cocktail reception and typical argentina asado.

There is a variety of activities like horseback riding, carriage ride, bikes and the swimming pool. 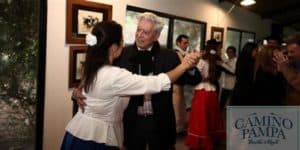 The place was visited by Literature Nobel Mario Vargas Llosa in 2011: he was received with a typical argentina asado, folkloric music, gaucho dances and demonstrations of gauchos skills on horseback.

An unique original tour can be taken in a private service to this Estancia in San Antonio de Areco: Full day tour to Areco Town and Estancia departing from Buenos Aires

La Blanqueada is an old building over 150 years old. The counter is equipped with the traditional bars which separated the owner from his customers – only trusted regulars were allowed access to the interior of the pulpería. La Blanqueada features wax figures playing cards at the bar.

The men are dressed in the traditional gaucho pants or chiripa, botas de potro (made from the skin of the horse´s hind leg, similar to a boot but with the toes exposed) and red kerchiefs on their heads, a typical attire of the times of the Governor Rosas (between 1829/1832 and 1835/1852).

This is one of the most unique gaucho collection of their uses and customs.

The Flour Mill – The Shed and Horsewear room

Alongside the pulpería stands an old flourmill or tahona dating back to 1848. Made entirely of wood, it was used to grind wheat and originally belonged to the Luján Guard .

It was used to obtain flour to make bread. The shed and horsewear room was named after Aniceto Melo, a famous raw hide braider from San Antonio de Areco.

The shed houses a colonial carriage and horse carts as well as the frame used to hang the ring for the traditional horse “ring races”.

The house resembles a fort insofar as it is surrounded by a moat and access is controlled by a drawbridge.

When immigrants ventured into the boundless pampas in times gone by, they built their farm houses following this pattern as a means of defense against the Indians.

This was the origins of the estancias where the gauchos were working.

The house reproduces an 18th century farm house with its welcoming corridor, its two side wings, whitewashed walls, tiled roof and low wrought-iron window railings where all these gaucho collection is preserved.

There are daily Full Day Private tours to this gaucho museum and to the traditional historical town of San Antonio de Areco: Tour to Gaucho Museum

These paintings are the work of Uruguayan Pedro Figari, who met Ricardo Güiraldes’ father and after a long friendship, they ended up being part of the Güiraldes family furniture.

The music, the dancing, the singing, the paintings and other artistic work, apart from literature, can be felt while touring around the museum. These may have been the feelings experienced by those who have taken care of it, still do and will keep an eye on it every day of the year in the future, as if it was their own home.

All the information about Museums in San Antonio de Areco

More information in Spanish about The Gaucho Experience