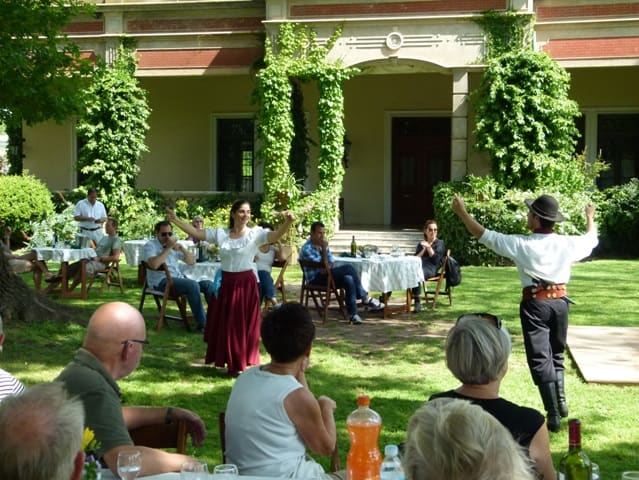 One of the most typical attraction at the Estancia tour Buenos Aires is a dance with folcloric music : the popular “Chacarera”

The Folklorica movement in Argentina re-introduced a wide variety of traditional dances to the Argentine public, including chacarera, a folk dance characterized by its cheerful rhythm.

Its name comes from the word “chacra” which in its colloquial form means a small plot of agricultural land, generally between 5 to 30 hectares, worked for agro-livestock production.

Although its origins are not clear, the chacarera began to dance around the 1850s in rural Argentina in the northwest and center of the country, before it finally arrived and made its entrance into the cities.

According to most versions of the folkloric dances, it begins in the province of Santiago del Estero, since the testimonies prove that in that province of northern Argentina there were chacareras in the language of the native natives there: “Quechua”.
It was Andrés Chazarreta in the early 1900 who wrote the first musical version.

Within the folk dances of Argentina, this is within what is called “picaresque dances”, with a very happy and agile rhythm, with lyrics that portrayed the situations of the population of the countryside, despite which it was later incorporated to dance halls in the cities of the interior of the country, reaching almost the entire country with few exceptions.

There are almost no documents that testify how its evolution was, but the original one seems to be dancing in the province of Tucumán.

Like many of the 70 folk dances of Argentina, this one also has four paragraphs in which the refrains are sung and in the intermediate one that is only instrumental. The measures can be six or eight depending on the version.

The music corresponding to this dance is performed by accordion, bass drum, violin and the ever present in Argentine folklore the Creole guitar.

The choreography of the Chacarera:

By the early 1900s, this dance arrived in Buenos Aires, but was unable to compete with the popular tango. In the 1960s it gained popularity again as musicians revitalized the dance’s traditional music.

Chacarera is a couple’s dance, but the two dancers dance independently of each other, not touching.

If more than one couple dances it at the same time, the couples do not interact with each other.

They often wear their hair in one or two braids.

Men usually wear boots or alpargatas, baggy pants, shirts of any color,  hats or “boinas”, and silk scarves tied at the neck.

How to experience an Estancia tour Buenos Aires

Run by Argentine people who live in San Antonio de Areco for many years, with unique knowledge and experience in Estancias, gauchos´ culture, and gauchos tradition.

It is a complete Day Tour to the San Antonio de Areco Town and Estancia El Ombu , combining the best of the pampas: The gaucho tour

Exclusive tour near Buenos Aires visiting the gaucho ambience, in an unique Argentina destination, making it a sustainable experience.

We pick you up at your residence in Buenos Aires in licensed minivans in the morning.
The local tour guide will show you all the edges of this gaucho Town San Antonio de Areco (named “cradle of the argentine traditions”) for near 90 minutes.
Then you will spend the rest of the day at the working Estancia El Ombu: empanadas, a horseback riding guided by the gauchos or a carriage ride, a complete lunch of argentine beef on the grill with argentina folcloric live music .

The Estancia Tour Buenos Aires includes these services:
– Transfer back and from Buenos Aires with pick up at your hotel/apt. with a professional licensed driver
– Gaucho Museum visit