The Quechua word pampa means space, a flat surface in the center of Argentina without trees in its original pampa argentina environment.

It is the name given to the large Argentine plain: one of the largest and most fertile plains in the world, a sea of land without end and according to the famous Argentine poet, Jorge Luis Borges, “the only place on earth where God can roam at large”.
“Well did the ancient Quechuas name the plains, with the word signifying space, for all was spacious – earth, sky, the waving continent of grass, the enormous herds of cattle and of horses, the strange effects of light, the fierce and blinding storms and, above all, the feeling in men´s minds of freedom, and of being face to face with nature, under those Southern skies.” 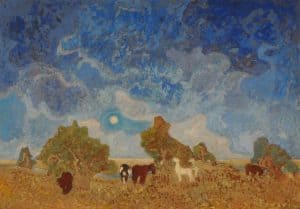 The delusion of the newly arrived was enormous, they did not find what they were looking for, there was no gold and there was no silver. But there was the pampa, the boundless pampa, waiting to show them the sort of gold that lay hidden in its soil.