Walt Disney and gaucho painter: Walt Disney´s cartoonists in their tour to Argentina hosted a barbecue during Disney’s visit to Buenos Aires. He showed up in full gaucho dress, and many joked that he looked more authentic than his hosts.

One South American artist who loomed large in the studio´s pretrip to Argentina research was Florencio Molina Campos in order to arrange a meeting Walt Disney and gaucho painter.

Despite little formal training, Florencio Molina Campos had years earlier established himself as a popular artist in Argentina with his painted caricatures of gauchos and gaucho life specially in the pampa, Estancias and countryside. 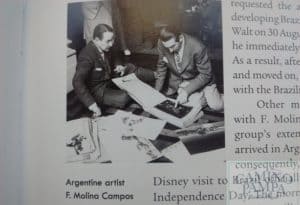 Thanks to his calendar-art contract with a company that manufactured a rope-soled canvas gaucho shoe called the alpargata, Molina Campos´ paintings had been distributed throughout the region from Buenos Aires since 1930.

Why Disney and gaucho painter meet

He was widely regarded, not least by himself, as the artistic spokesman of the gaucho culture, and his fame had become international through exhibitions in Europe and the United States. Advance research by the Disney studio clearly established that cooperation between Walt Disney and gaucho painter Molina Campos would considerable boost Argentine acceptance of Disney’s film venture. 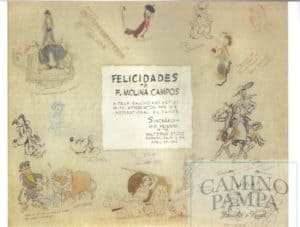 Postcard of from disney and gaucho painter

Dr. Henry C. Niese, the honorary consul for Argentina in Los Angeles, told the staff that “Campos had told him that if he (Campos) were ever associated with the making of a cartoon, it would have to be Campos-produced, Campos-drawn, Campos-written.”

On the other hand, the artist had already shown an interest in Disney studios after the meeting Walt Disney and gaucho painter (he had visited the studio on one of his previous trips to the United States), and clearly understood that association with Disney would enhance his own prestige.

“The yards were immense, covering a square mile,” he noted. “Some of the gauchos were having mate before changing to fresh horses. They invited me into their small saddle room in the Estancia to sit for a while. There were (Molina) Campos prints all over the walls, well fly-specked. These people idolize Campos´ drawings.”

You can visit this and some other gauchos museums, galleries and culture attractions in the Gaucho Town: San Antonio de Areco bus tickets in “Arecobus”