A group of friends, the most successful chefs from Argentina and Uruguay, living together for a week in an Estancia of the province of Buenos Aires where the group shared a living outdoors that allowed for a relaxed chat among colleagues.

Members of the Journey at the Estancia: 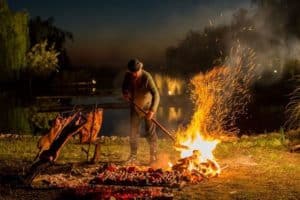 Francis in action in the Estancia

Last week, lead by Francis, was concluded the recording of the cycle in Estancia La Bamba in San Antonio de Areco: cradle of the gaucho tradition, in the province of Buenos Aires.
Where local “asado”: beef cooked slowly on wood embers in some different ways is King, they got inspiration for their creative process of making new great simple recipes, and to recreate the old fashion typical dishes of la pampa in Argentina and Uruguay.

The idea of Francis was to release this cycle that qualify as a “gastronomic docu-reality” on December performing a series of repetitions during the same month. “December and year-end celebrations are an excuse for this gathering of friends,” say the producers.

If you would like to book a Private Tour to experience this special environment in la pampa Argentina: Private tour to Estancia

Making a visit to an Argentine Estancia: Areco travel agency